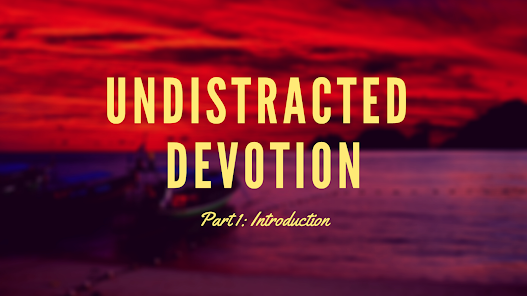 For those of us who claim to know Christ and identify ourselves as Christians, how much do our lives reflect the depth of devotion that He calls us to? For those yet to believe in Jesus Christ as Lord and Savior, do we offer them a valid and agenda-free look into what being a follower of Jesus means? Or do we only go "skin-deep" on both accounts?

Though there would be many responses to the question "What is one of God's primary purposes for His people?", I think one that is often glossed over, if not completely overlooked, is that God wants us to become more like His son. God wants to conform us into the image of Christ. This has been a central part of God's intent since the creation as evidenced when He says "Let us make mankind in our image, according to our likeness...so God created man in His own image, in the image of God He created him; male and female He created them." Genesis 1:26A-27 The "our" does in fact include Jesus Christ who is the Word made flesh. Consider these scriptures authored by the apostles John and Paul.

"He is the image of the invisible God, the firstborn of all creation: for by Him all things were created, both in the heavens and on earth, visible an invisible, whether thrones, or dominions, or rules, or authorities - all things have been created through Him and for Him. He is before all things, and in Him all things hold together." Colossians 1:15-17

The apostle Paul also tells us in Romans 8:29 that "For those whom He foreknew, He also predestined to become conformed to the image of His son, so that He would be the firstborn among may brothers and sisters;".

To be conformed into the image of Christ. To bear His likeness in how we live every minute of our earthly existence. For the believer, is there any calling more glorious and worthy for us to pursue? This pursuit of following Christ and allowing Him to transform us into His image is simple, but it's not easy. Seeing the example of Jesus in the gospels and reading the words He spoke are not complicated endeavors and the fundamental understanding of what our "Christian" lives should look like does not require supreme intelligence. But, the application and actual living this out in our daily reality can be difficult and in fact can feel almost impossible much of the time. In Matthew 11:28-30, Jesus says "Come to Me, all who are weary and burdened, and I will give your rest. Take My yoke upon you and learn from Me, for I am gentle and humble in heart, and you will find rest for your souls. For My yoke is comfortable, and My burden is light." To be yoked is to be in submission to someone or something, under its control or influence, and/or carrying the burden of a task or mission. In being yoked to Christ we are to serve and obey Him; to be in submission to His will, under His influence, and carrying out His mission of glorifying our Heavenly Father and making the kingdom of Heaven known.

So what is it that can stand in the way of us freely following and obeying Christ? I believe that the words of Paul to the church in Corinth gives us great insight. If we look a bit deeper than just the surface context, we can see a theme that is applicable to every situation in our lives. Paul writes to the Corinthians in 1 Corinthians 7:29-34A; 35 "But I want you to be free from concern. One who is unmarried is concerned about the things of the Lord, how he may please the Lord; but one who is married is concerned about the things of the world, how he may please his wife, and his interests are divided...I say this for your own benefit, not to put a restraint on you, but to promote what is appropriate and to secure undistracted devotion to the Lord."

Paul says that what is appropriate for God's people is to be free from concern (over worldly things), to not have their interests divided (between the things of God and things of the world), and to have undistracted devotion to the Lord. We can look all the way back to God's command to the Israelites when He was setting them apart to be His people and see this was has not changed over thousands of years. In Exodus 20:3, God says "You shall have no other gods before Me." Pretty simple and straight to the point. There is to be no-one and nothing ahead of or in place of our pursuit of the Lord. What is a god? It is that which has your focus, attention, and allegiance. It is that which influences your choices and direction. So there should be nothing that influences us or has our loyalty more than THE God, the creator, the great I AM.

In his book The Pursuit of God, author A.W. Tozer says "Our woes began when God was forced out of His central shrine and "things" were allowed to enter. Within the human heart, 'things' have taken over. Men have now, by nature, no peace within their hearts, for God is crowned there no longer, but there in the moral dusk, stubborn and aggressive usurpers fight among themselves for first place on the throne. This is not a mere metaphor, but an accurate analysis of our real spiritual trouble...The roots of our hearts have grown down into things, and we dare not pull up one rootlet lest we die. Things have become necessary to us, a development never originally intended. God's gifts now take the place of God, and the whole course of nature is upset by the monstrous substitution." What a powerful statement that speaks to the heart of what contemporary culture has become, and unfortunately that includes a lot of "Christian" culture. For many modern-day Christians, especially those in America, our lives have become ordered and directed around temporal "things"; and if we removed the audible confession of Chris is Lord from our lips the unfortunate truth is revealed that the general state and pursuits of our lives reflect more of the worldly pagan kingdom than they do the kingdom of God.

There are many things in this world which can and do take our eyes off of the Lord, which supplant him from first place in our hearts and lives. Of these, we'll look at 4 that I believe are the most prominent and all-encompassing in society today that cause Christians to be consumed with concern, have their interests divided from the Lord, and keep us distracted from having a laser-focused devotion to Christ. We'll explore:

Stay tuned as we dive into these. There's no ambiguity with what God expects of us and how Christ desires for us to live under His headship and authority. With Christ, the kingdom of Heaven is at hand; it's in our midst. He's called us to be part of manifesting that reality to those who have yet to experience the restoration that only He can bring. To correctly display the truth of Christ, it requires that He be the central and supreme authority on the throne of our hearts. 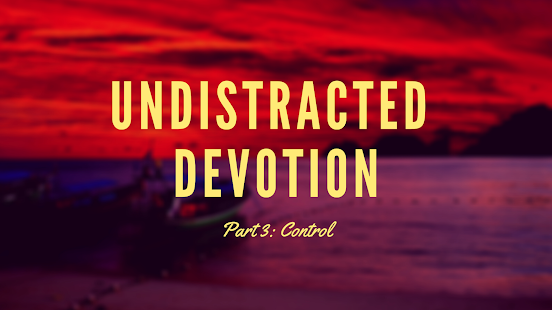 If you're new to the blog and/or this series, Undistracted Devotion, I recommend you begin with the series introduction by going  HERE . This will help frame the context of the material to come and set the foundation for moving forward with the intended background thoughts and scriptures in mind. Today we're looking at another primary way we can lose sight of Christ and become distracted and divided in our devotion to Him. This is the pursuit of power, influence, and the elevation of self which all fall under the idea of control.  From our earliest days, we all have a desire to exert authority over our lives and what happens to us. We have an innate goal of making things that impact us go the way we want and work in our favor. As we mature, this idea becomes more ingrained in our psyche by society and the marketing messages we receive. We're instilled with the ideas that strength equals power, putting yourself first is necessary to reach your goals, and that you can impro 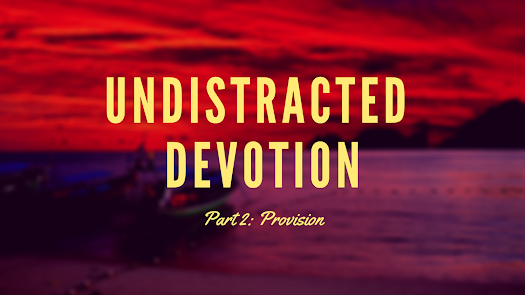 If you're new to the blog and/or this series, Undistracted Devotion, I recommend you begin with the series introduction by going HERE . This will help frame the context of the material to come and set the foundation for moving forward with the intended background thoughts and scriptures in mind.  As we proceed through this idea of provision for the first of four primary ways our interests can be divided and our attention distracted from solely being centered on Christ, we should keep this question in consideration:  Do we live in such a way as to be free from concern of provision so that we are undistracted in our devotion to the Lord?  Or, to think of it another way:  Do our thoughts spend more time focused on how we're going to be taken care of and what we can do to make this happen than they do on being mindful of Christ's presence and how He wants us to live according to His nature at any given moment of the day? This is the essence of trust. Do we as Christians trust C